Read content and introduction
By Marx. Dialectical Studies at December 27, 2010 No comments: 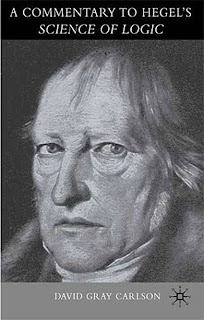 David Gray Carlson, A Commentary on Hegel's Science of Logic, Palgrave Macmillan, 2007, pp. 700.
This book constitutes a major advancement in the study of Hegelian philosophy by offering the first full commentary on the monumental The Science of Logic, Hegel's principal work which informs every other project Hegel ever undertook. The author has devised a system for diagramming every single logical transition that Hegel makes, many of which have never before been explored in English. This reveals a startling organizational subtlety in Hegel's work which heretofore has gone unnoticed. In the course of charting Hegel's logical progress, the author provides a vigorous defence and thorough explication of unparalleled scale and scope. The book covers the entire range of subjects connected with The Science of Logic such as Being, Essence, Measure, Subjectivity and God, showing how Hegel used logic to make transitions from one category to the next. The book also mediates Hegel's confrontation with Kant, whose Critique of Pure Reason is Hegel's major competition in metaphysical systemization. Any student encountering The Science of Logic, perhaps the most difficult and by far the most rewarding of Hegel's philosophical works, will find in Carlson's book an invaluable companion to their study.
By Marx. Dialectical Studies at December 27, 2010 No comments: